TheCamera clock is a clock that carries a miniature camera. This then gives the device a dual function. It can be used as spy ing material, such as obtaining confidential information or providing evidence. This type of clock can also be used as a video surveillance equipment. The device allows you to keep an eye on your home during absences. On the surface, camera spy wall clock of course looks like a mundane clock. The device has a dial with numbers and the three hands that this type of object should possess. There is no visual information on the presence of a miniature camera. Moreover, the watchmaking part of spying equipment is not fake. Indeed, a spy clock gives the time.

As a general rule, a spy camera clock has a high-performance video sensor. The component allows high definition (HD) or very high-definition (Full HD) shooting. The device also offers features such as motion detection and infrared vision. Thanks to motion detection, the spy camera pendulum automatic film when an activity is spotted. After that, infrared vision allows shooting in low light conditions, especially at night.

front page Camera clock uses external memory for data storage. The models that are common on the market are often expandable up to 32GB. Note that photos and videos are recorded in standard formats. This allows playback with default applications and programs from the computer or smartphone. In addition, spying equipment comes with a USB cable for data transfer.

Another peculiarity of a Camera clock, remote vision. The spy clock has a Wi-Fi antenna that allows it to broadcast what it is filming. Note that this option requires an Internet connection. It then becomes possible to watch live on the smartphone or computer the images broadcast. The feature is compatible with Android or iOS phones - as well as computers on macOS or Windows.

TheCamera clock spy is a wireless device. It uses a high-capacity lithium rechargeable battery as a power supply. It offers several hours of autonomy. 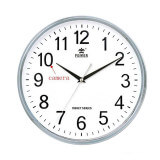 This clock spy camera will easily find its place hung on the wall in your home. The wireless internet is of this a perfectly controllable and practical accessory remotely.